At the London 2012 Games the Team won Gold on 468 points ahead of Germany (440 points). The British Team largest margin ever, 5 Gold medals (incl. Team Gold), 5 Silver and 1 Bronze which is a Paralympic record. Sophie Christiansen had another world record too of 84.75% and all scores were above 71% including 4 tests above 80%! Individual rider Natasha Baker also set another record of 82.80% in the Grade II Freestyle a massive 5% lead over Britta Napel of Germany! Well, it was simply amazing! 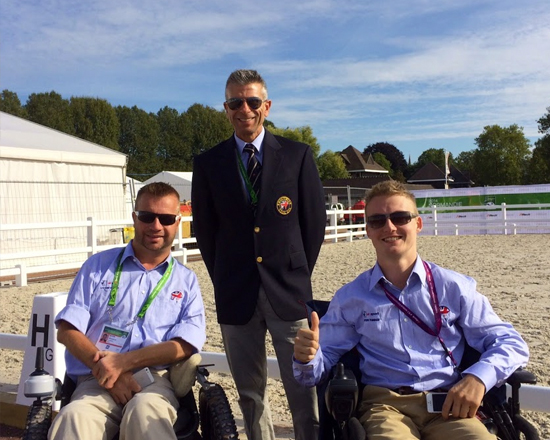 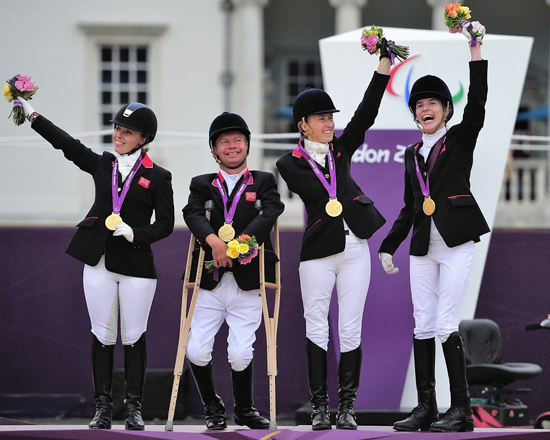 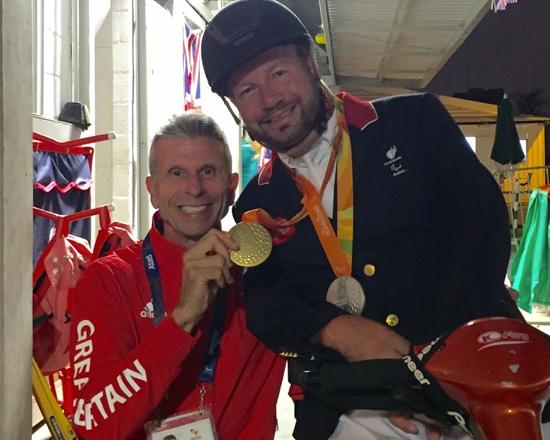 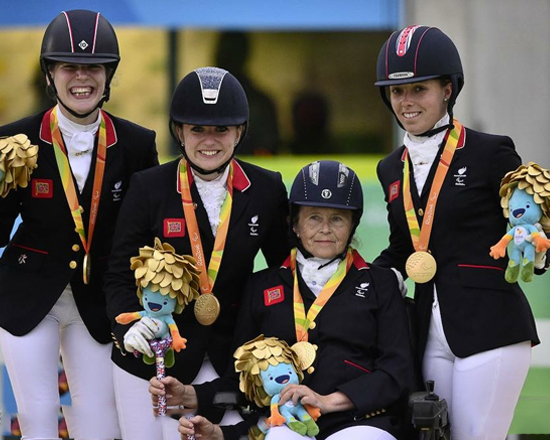 It was Team Gold for Para-Dressage Team GBR at the 2016 Rio Paralympic Games too with a total of eleven Gold and Silver medals! A record breaking success with athletes medalling in all the classes they took part in! Anne Dunham, Sophie Christiansen, Lee Pearson, Natasha Baker and Sophie Wells all achieved Gold (7 Gold 4 Silver). Triple Gold medallist Sophie Christiansen on Di Redfern’s Athene Lindebjerg scored highest in the overall competition just short of 80% in the Freestyle. Natasha Baker and Cabral were also triple Gold medallists! Under Michel’s last coach leadership for the British Federation, the Team won Gold at the 2017 FEI European Championships in Gothenburg, which included two triple gold medalists (Susanna Hext, GIII and Julie Payne, GI), a total of 9 gold, 1 silver and 1 bronze medals. Another European record! 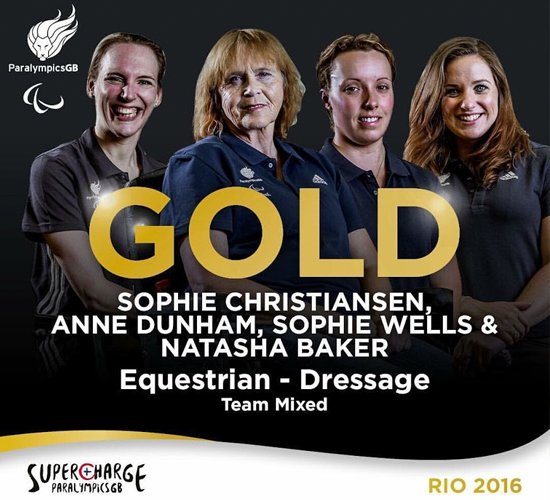 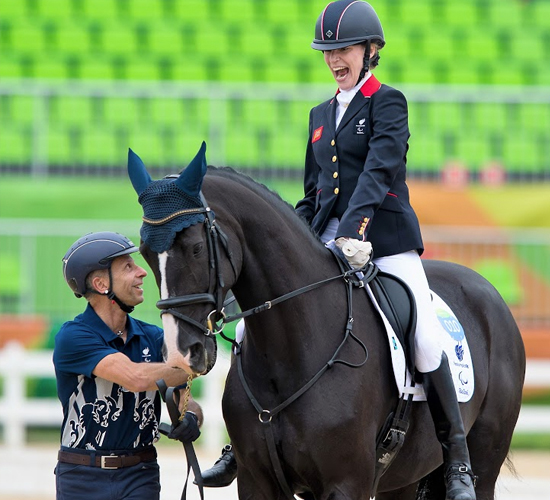 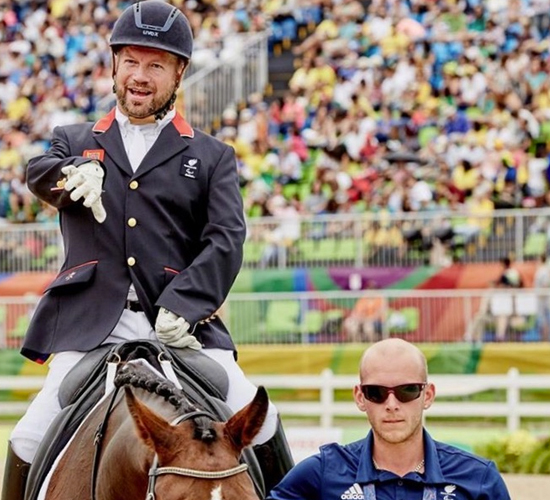 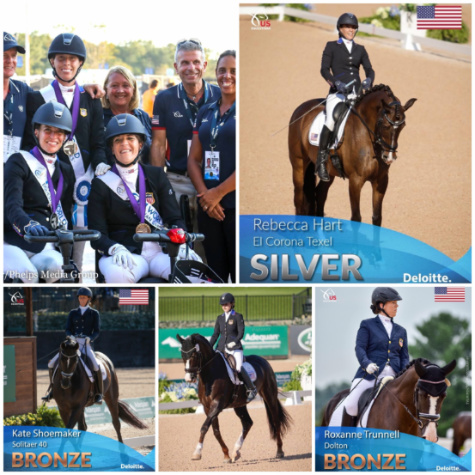 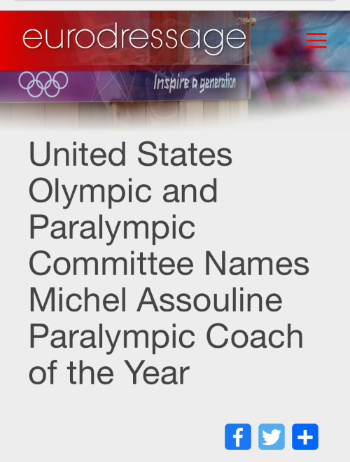 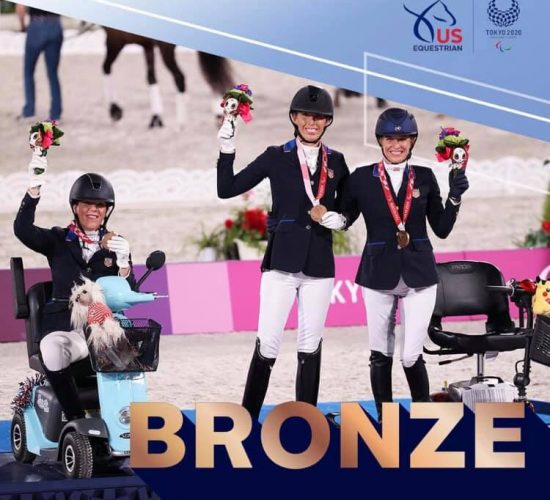 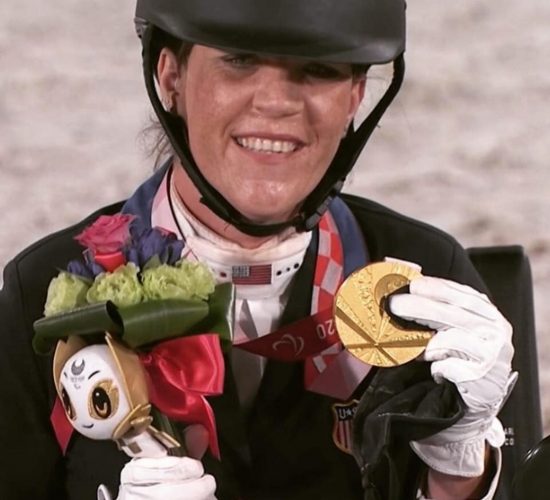 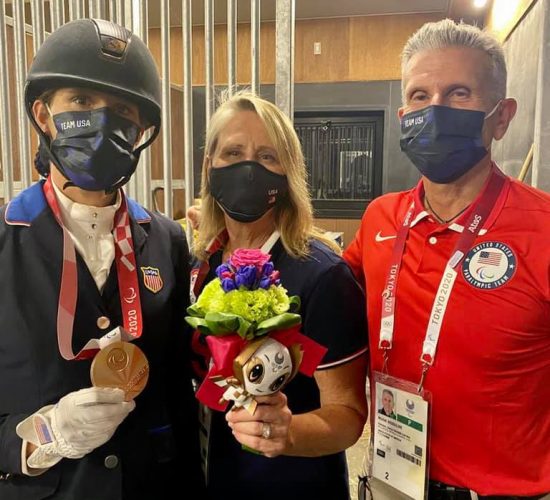 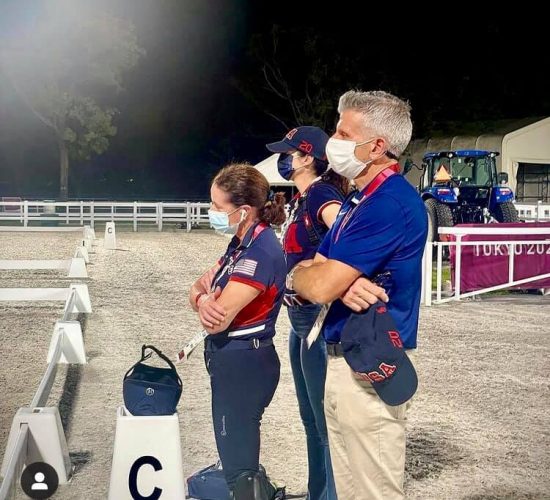 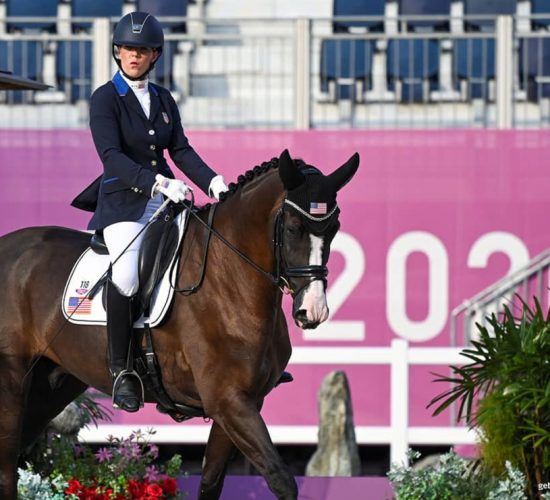 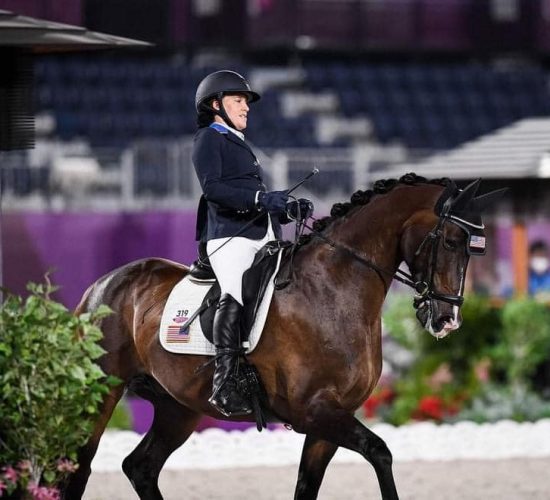 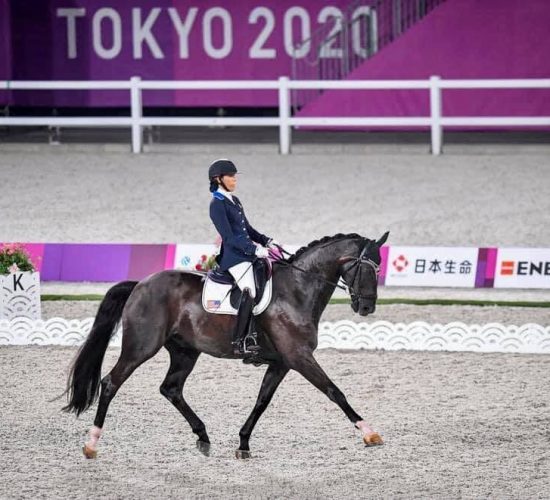 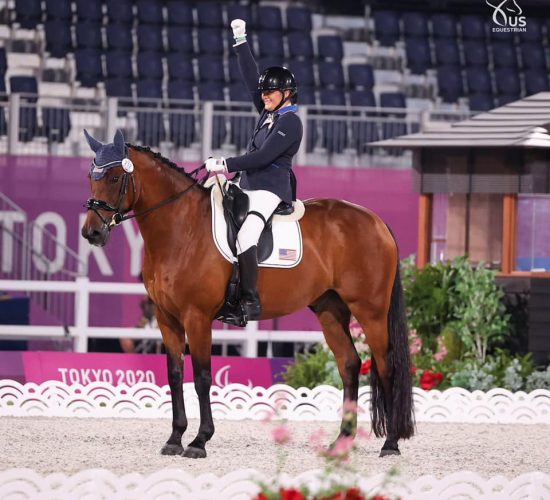 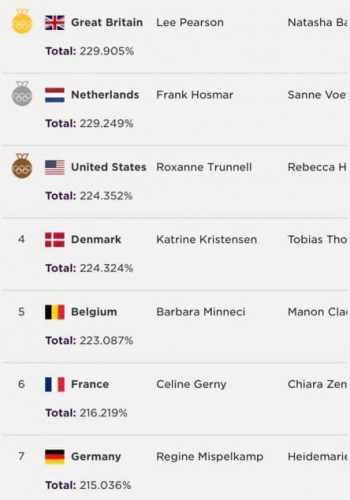 Quote from Sophie Christiansen after winning three gold medals at the 2016 Rio Games:  “Michel and Mette helped me look for the right horse for Rio 2016 a few years ago. They know what I need in a horse and what my goals are. Through their connections, they found the perfect horse, Athene, on which I knew I could defend my Paralympic titles. Di Redfern bought Athene for me purely based on her talent and temperament. We knew she would need a little more training for a Para rider, so the Assoulines’ head girl, Jess Thompson, took her out to shows and let her see everything she would with me. When Jess became Open Elementary National Champion with Athene in 2014, that was beyond anything we expected! I would not have won gold in Rio without Michel’s help as Para coach. The whole team has definitely contributed to my success in Rio!“

On May 2017 Michel started a new chapter as USEF Head of Para-Equestrian Coach Development and High-Performance Consultant. Under his leadership role as Head Coach, the US Para Dressage Team won their first medals ever at a World Championship, a historical medal record at the Tryon 2018 FEI World Equestrian Games. Scores were high, all four riders above 71.66% (Annie Peavy) on the last day of competition, with Roxanne earning bronze on 75.58%, Rebecca, silver on 73.24% and Kate, bronze on 73.23%! Rebecca also earned bronze in the Individual test (72.45%).

In the build-up to Tokyo 2020, the U.S. Para Dressage Team ranked number one in the FEI World rankings, whilst Roxanne Trunnell remained overall FEI World number one rider, and Rebecca Hart grade III FEI World number one  [February 2021]. Subsequently, on 17 February 2021, the United States Olympic and Paralympic committee (USOC and USOPC) named Michel Assouline Paralympic Coach of the Year 2020 across all disciplines. The USOC wrote: “Michel Assouline’s innovation and persistent drive to grow the sport and expand the program has impacted the whole Para Dressage community with Support and Innovation. Through the pandemic, Assouline has helped several athletes work through emotional pressures and reposition athletes’ training schedules by utilizing technology and focusing on enhanced communication. His efforts include online judging, direct coaching through PIXIO and other virtual platforms, group meetings and one-on-one meetings, which proved effective when athletes showed performance improvement at the 2020 U.S. Para Dressage National Championships October 2020. In three years, Michel has built a Para-Equestrian Dressage Coach Certificate Program that was rolled out across the country during the latter part of 2019 and early 2020 that received high participation with 32 coaches going through the program. Success: In March 2020, the U.S. Para Dressage Team ranked No. 1 in the world having achieved scores that would have tracked Team USA to be on the podium at Tokyo 2020. At the heart of Assouline’s success is his ability to work with each athlete and build a specialized program around them to improve their development and performance, which can be seen in Roxanne Trunnell, who is currently ranked No. 1 in the world in her grade and overall across all five grades.”

August 26th 2021 saw the start of the Tokyo 2020 Paralympic Games. “What a phenomenal Team USA ‘mission accomplished’ feeling coming home with a historic Team Bronze medal, two Individual Gold medals and a Paralympic record!” [quoted U.S. Team Chef d’Equipe Michel Assouline]. The U.S. Para dressage team made headlines winning its greatest tally of Paralympic medals in 25 years. Roxanne Trunnell, aboard Dolton was double-gold-medalist in the Individual test Grade I with 81.46%, and in the Freestyle test with the overall highest Tokyo 2020 score of 86.927%! Her medals were the United States’ first Paralympic equestrian medal in 17 years and first gold in 25 years. She is also now the third woman to ever win a dressage gold medal for Team USA at either the Olympic or Paralympic Games! The team of Roxanne Trunnell, Rebecca Hart, with El Corona Texel, and Kate Shoemaker, with Solitaer 40 earned Bronze in the Team test to music for the program’s first-ever Paralympic Team medal. Individual 4th rider Béatrice de Lavalette, in what was to become her first Paralympics, scored 70.26% and 72.19% in both Grade II Individual tests, finishing in respectable 5th and 6th places!

You can get involved in the sport of para-equestrian dressage by selling or loaning your horse to a successful athlete. Do not hesitate to contact Mette Assouline to have your horse assessed and find a suitable rider.